The Death of Traditional Management

Steve Denning, author of “The Leader’s Guide to Radical Management” (Jossey-Bass, 2010) has published a great article on Forbes.com entitled “Wal-Mart And The Futility Of Traditional Management”.  In this article he points out the declining business numbers of Wal-Mart and compares them to thriving and innovative businesses such as Amazon.  He explains that the central reason for this decline is traditional management of the 20th century in which profits are the driver of economic activity.  But, “working over “pricing and merchandising issues” isn’t going to save Wal-Mart. Instead Wal-Mart has [to] reinvent itself. Wal-Mart has to start delighting its customers.”

It is true that Wal-Mart is an excellent example of „traditional management“ as we have seen in so many firms for a very long time.  It is also true that Wal-Mart has to change something unless it was go down the drain sooner or later.  However, I am not convinced that a change in management may be sufficient.  Radical management as Steve describes it in his book is the right ingredient.  Alas, I don’t think they are sufficient.  What it takes to change the game in cases like Wal-Mart is LEADERSHIP.  This leadership ought to be based on the principles of radical management.  Leadership has to ignite the fire for change and innovation; radical management can sustain it.

The 7 basic and inter-locking principles of radical management according to Steve Denning are the following:
1. The goal of work is to delight clients.
2. Work is conducted in self-organizing teams.
3. Teams operate in client-driven iterations.
4. Each iteration delivers value to clients.
5. Managers foster radical transparency.
6. Managers nurture continuous self-improvement.
7. Managers communicating interactively through stories, questions and conversations.

Leadership starts with assessing and understanding the situation; this includes understanding its customers and finding out what delights them.  This is a first step.  Then leadership has to help build a vision for change.  Without this vision, the „project“ is likely to fail.

It will be very interesting to see whether or not Wal-Mart will be capable of making this change.  Personally, I have some doubts.  In Germany Wal-Mart miserably failed in its market entry.  Not because it sold the wrong products.  Not because the products were not always cheaper.  But because Wal-Mart did not bother trying to understand the culture of German customers.  This is negligence, yes.  But even more so it shows that Wal-Mart has the wrong attitude; it lacks the willingness to look left or right.  Call it arrogance, ignorance or whatever you like.  It is the recipe for long-term failure.

Wal-Mart has a lot of money and a lot of assets.  These will secure that Wal-Mart will be around for quite some time to come.  However, as long as it limits its focus on managing them, its business will deteriorate.  Radical management as proposed by Steve Denning is a necessary condition for change but it is not sufficient.  What it takes is LEADERSHIP based on radical management.

To learn more about this kind of leadership for success, read my book „Leadership Principles for Project Success“ (CRC Press, 2011).

‘Chairlift to Innovation’ concludes on a happy note

You have to behave like a kid to become a leader 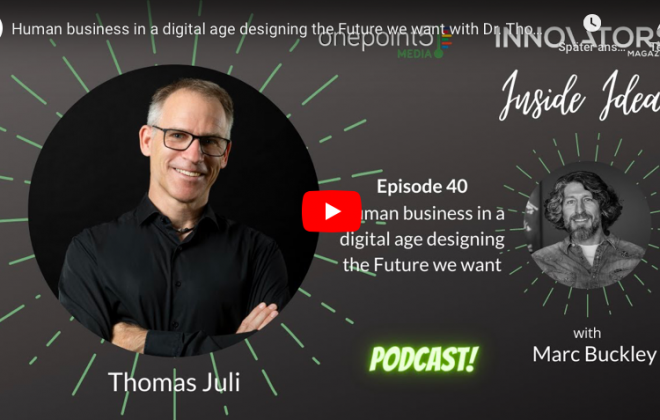 Design the future you want with Human Business